The Royal Navy in Battle: an Analysis of Sea-Power and Actions During the First World War, 1914-18

Home » The Royal Navy in Battle: an Analysis of Sea-Power and Actions During the First World War, 1914-18 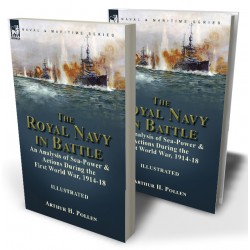 Naval strategy, tactics, weapons and sea-battles of the Great War

This excellent book offers an erudite and critical analysis of sea-power during the First World War, 1914-18, from the British perspective. Naval gunnery, weapons, techniques etc. are considered in the context of the notable naval actions of the war. Each engagement study includes diagrams to demonstrate tactical manoeuvrers at sea. The engagements, which are featured chronologically, are the destruction of the ‘Koenigsberg’, the capture of the ‘Emden’, the Battle of the Falkland Islands, the Heligoland Affair, the Dogger Bank action, the largest naval engagement of the war, the Battle of Jutland, and the raids on the Continental coast, towards the end of the conflict, at Ostend and Zeebrugge. Contains numerous illustrations which were not present in the original text.

In the ten years preceding the war, Admiralty policy, as shown by the official apology for the Dreadnought design and by the course of naval ordnance administration, had been governed by the purely defensive idea of providing ships fast enough to keep outside of the zone of the enemy’s fire, armed with guns that outranged him. The professed object was to have a chance of hitting your enemy when he had no chance of hitting you. At the Falkland Islands there was given a classic example of the tactics that follow from this conception. On the assumption that twenty-five 12-inch gun hits would suffice to sink each of the enemy’s armoured cruisers, it appeared that in this engagement the 12-inch gun had attained the rate of one hit per gun per 75 minutes.
This figure may be contrasted with the one hit per gun per 72 seconds attained by the Severn in her second engagement with the Koenigsberg at the Rufigi. The contrast seems to show that it was only the obsession of the defensive theory that explained contentment with methods of gunnery so extraordinarily ineffective in battle conditions. For the difference in the rate of hitting was almost completely explained by the range being constant at the Rufigi, and inconstant at the Falklands. And the methods of fire control in use were proved at the Falklands to be unequal to finding, and continuously keeping, accurate knowledge of an inconstant range.
Again at the affair of the Dogger Bank, Lion, Tiger, Princess Royal, New Zealand, and Indomitable were in action for many hours against three battle-cruisers and an armoured cruiser, and for perhaps half the time at ranges at which good hitting is made at battle practice; and although two of the enemy battle-cruisers were hit and seen to be in flames they were able, after two and a half hours’ engagement, to continue their retreat at undiminished speed, and only the armoured cruiser, whose resisting power to 13.5 projectiles must have been very feeble, was sunk.
The lesson of Jutland is still more striking, and it is possible to draw the moral with a little greater precision since it has been officially admitted in Germany that Lutzow, Admiral von Hipper’s flagship, the most modern of Germany’s battle-cruisers, was destroyed after being hit by only fifteen projectiles from great guns. It is not clear from the German statement whether this means fifteen 13.5’s and omits to reckon 12-inch shells, or whether there were fifteen hits in all, some of the one nature and some of the other. The latter is probably the case; for we know from Sir David Beatty’s and the German despatches that it was Invincible’s salvos that finally incapacitated the ship and compelled Von Hipper to shift his flag.