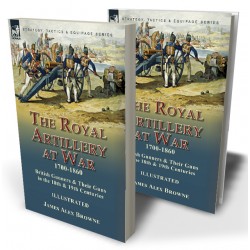 The exploits of outstanding artillerymen

This book begins with the activities and equipment of the gunners during the War of Austrian Succession and the Seven Years War as it was fought across the globe. Although campaigns and actions are considered generally the exploits of noteworthy individuals are also interestingly detailed. The defence of Gibraltar is particularly well considered. The end of the 18th century brought the rise of Revolutionary France and the dawn of the Napoleonic period. The guns and notable gunners of the Peninsular War, the War of 1812 and the Waterloo Campaign of 1815, are extensively described in these pages. Later in the 19th century the actions in Syria in 1840, wars against Kaffir tribes in South Africa, the Crimean War of 1856, the Opium Wars and conflicts with the Maoris of New Zealand are well covered. In its original edition, titled ‘England’s Artillerymen’, this otherwise excellent book was laden with extraneous material which has been removed to create a new and well focused Leonaur edition to which illustrations have also been added.

It was noon when the allies arrived at the River Alma, on the southern side of which the Russians, in position on the heights, were waiting to receive them. The French commenced the battle by turning the enemy’s left flank; the 2nd and light divisions of the British then dashed through the river and up the face of the heights, to attack the Russian batteries. The British artillery had been throwing shot into the Russian redoubts since the commencement of the French attack, and had lost one officer, Captain Dew, who was struck in the head by a round-shot; now they were ordered to advance.
Turner’s battery was the first to cross the river. A wheel was knocked off one of the guns by a round-shot while in the middle of the stream, and officers and men vied with each other in their exertions to get the gun ready for action, they being all the time up to their middles in water and exposed to a most destructive fire.
Two guns of the battery quickly arrived at the spot to which they were ordered by Lord Raglan, but they had advanced so rapidly and the difficulties in crossing the river were so great that there was but one bombardier besides the drivers who came up with the guns. The officers of the battery instantly dismounted, and assisted by Major Dickson, Captain Gordon, and the officers of General Strangways’ staff, served the guns until the gunners came up. The first shot fell too short, it was aimed at the Russian 18-gun battery, which was causing our second division, in its immediate front, and the light division and the brigade of Guards in its right front, great loss.
The guns were only 9-pounders, and the distance was considerable. The second shot, however, went through a Russian tumbril and killed two horses. These two shots were sufficient: the Russian general seeing that he was taken completely in flank, gave orders for them to limber up their guns. This they did admirably, but during the time our two guns kept playing on their retiring artillery, causing them great loss; and the gunners and two more guns of Turner’s battery having now arrived, the firing went on rapidly.
This battery sustained many losses, and such was the scarcity of men at one of the guns that Lieutenant Walsham took a gunner’s place, and was in the act of sponging the gun when he received a bullet in the right breast which instantly deprived him of life.
This young officer, the third son of Sir John Walsham, Bart., was one of that daring class of adventurers whose name became public by ascending Mont Blanc, and the feat, as performed by him, was duly mentioned in the papers of the day. At the Alma he ascended a more glorious height, and his devotion in acting as a common gunner, which brought his uniform to the enemy’s mark, entitles him to the grateful remembrance of his country. He had just entered his twentieth year when he fell in the first battle in the Crimea. The only other casualty among the officers of Royal Artillery was Lieutenant Cockrell whose leg was carried away by a cannon-shot. He died after amputation.
As soon as the Russian guns ceased firing, Wodehouse’s battery, which had been limbered up and led across the river by Colonel Dacres, came up on the right of the 30th regiment. The slopes in front were still covered with the enemy’s skirmishers, obstinately contesting the ground with our own, and giving way, if at all, very slowly.
Over the heights beyond the contested battery, the helmets of a Russian column might be seen, and presently the solid mass, apparently about 2,000 strong, marched over the hill and began to descend towards the British line. A shell from a gun, laid by Colonel Dacres himself before the gun detachment could come up, dropped among the Russian skirmishers; the other guns coming up in succession, opened their fire on the column and struck it every time. Franklin’s and Anderson’s batteries, crossing the river, came up and opened on the left, and Paynter’s followed; and the column, after marching about fifty yards down the hill, halted, turned about, and disappearing over the crest, was seen no more.
Maude’s troop went up the hill and into action in the most gallant style, on the extreme left of the English position, and did great execution, as there were upwards of 200 dead Russians on the spot his shot had reached, and where no other battery had directed its fire.
The British infantry now crowned the heights, and the position was ours. While ascending the hill, some men of Wodehouse’s battery discovered a Russian general (Shokanoff) and his servant lying on the ground as though they were wounded. Gunner M‘Anasby and Trumpeter M‘Laren, to whom I believe the credit is due for having discovered these impostors, at once delivered them up to their officer, Lieutenant Richards, by whom the general was received in a manner befitting his position. He was sent to Scutari, where he afterwards died of cholera.
At the summit of the hill a brief stand was made by the enemy, and it seemed as if the contest was about to be renewed, but the infantry, levelling their bayonets, advanced at a rapid pace, and the Russians, dashing down their accoutrements and arms, fled like frightened sheep down the declivity. The victory was complete—a great army in a position of immense strength had been ignominiously defeated in less than three hours by the sheer valour of English and French soldiers.
You may also like