Volunteer Nurses & Doctors In the Serbo-Turkish War of 1876: Service in Servia Under the Red Cross by Emma Maria Pearson and Louisa Elisabeth McLaughlin & and Adventures in Servia by Alfred Wright

Home » Volunteer Nurses & Doctors In the Serbo-Turkish War of 1876: Service in Servia Under the Red Cross by Emma Maria Pearson and Louisa Elisabeth McLaughlin & and Adventures in Servia by Alfred Wright 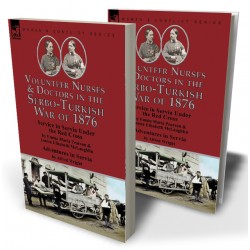 The experiences medical volunteers serving with the Red Cross

This special two in one Leonaur book focusses on the work of volunteer nurses and doctors during the Serbo-Turkish War of 1876. Having declared war on the declining Ottoman Turkish Empire, which had subjugated the eastern European Christian nations for centuries, the Serbs, poorly provisioned in practically every respect except spirit, readily accepted the assistance of volunteers—particularly for the car of the sick and wounded. The first account in this volume was written by the female partnership of Pearson and McLaughlin. These dauntless women had already worked as volunteer nurses during the Franco-Prussian war of 1870 and had written a book on their experiences, ‘Our Adventures During the War of 1870’ which is also published by Leonaur. The second acount, ‘Adventures in Servia’, by British volunteer doctor Alfred Wright, provides the reader with a view of this conflict from a medical perspective, while at the same time delivering—as the title suggests—a riveting first-hand account of this little reported 19th century war in eastern Europe.