General Seydlitz: Accounts of the Military Career of Frederick the Great’s Outstanding Commander of Caval

Home » General Seydlitz: Accounts of the Military Career of Frederick the Great’s Outstanding Commander of Caval 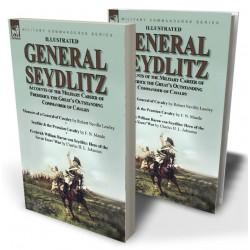 Accounts of one of the great commanders of European cavalry

Friedrich Wilhelm Freiherr von Seydlitz was indisputably one of the greatest cavalry commanders in Frederick the Great’s Prussian Army. As a senior officer he is credited with the development of the Prussian cavalry during the Seven Years War. His first experiences of war were during The War of Austrian Succession, (1740-48) and in the first and second Silesian Wars. Seydlitz was known for his leadership as well as his reckless courage. At the zenith of his career he was renowned for his ability to quickly assess battlefield developments, understand what action was required and putting it speedily into motion. He is particularly acclaimed for his leadership during the Battle of Rossbach,(1757) when he led thirty eight squadrons of Prussian cavalry in a crushing charge to rout both the French and Imperial Armies. He played a pivotal role as a cavalry commander at Leuthen and Kunersdorf among others, whilst at Freiberg he demonstrated his value as a commander of both cavalry and infantry formations. This special Leonaur edition brings together three accounts of Seydlitz’s military career accompanied by illustrations which did not appear with the original texts.

In the advance, which took place with great rapidity, a slight incident occurred, illustrative of Seydlitz’s character. A squadron of the Prussian Life Guards was in disorder, in consequence of the captain’s horse being a little shy: this was soon remedied, and the movement went on steadily. But Seydlitz had observed the circumstance; he dashed to the spot, and in the plenitude of command drove the unhappy captain from before the advancing line, with a furious injunction to “go to the Devil;” nor was he ever seen again with his regiment This violent exercise of authority the king forbore to censure, probably because he recognised in it the same impetuosity which rendered Seydlitz irresistible in action.
All was now ready except the drawing of swords, which Seydlitz purposely delayed until the last moment, when he rode to the front, and in sight of the whole line gave the signal himself by a slight waive of his tobacco pipe. In a moment every man’s sabre was unsheathed, and Seydlitz and his followers rushed at full speed on the foe. The French troops, who were commanded by the Duc de Broglie, and consisted of fifty-two squadrons, endeavoured hastily to deploy, but Seydlitz allowed them no time: before their preparations were completed, they were overwhelmed and cut in pieces.
Two Austrian and two French cavalry regiments endeavoured to meet the storm; one of the latter arrested for a moment a Prussian hussar corps, but in the next they were beaten down; they then turned round, and fled like the rest, in the greatest confusion. A narrow road, near Reichertswerben, checked the fugitives, and many were made prisoners. The scattered horsemen escaped beyond the Unstrutt, and did not appear again that day. Seydlitz, who followed them to Reichertswerben, collected his breathless forces, and led them to the left front through Tagawerben, until he stood in rear of the enemy’s infantry.
The king who, with his infantry, had turned the right flank in the same manner that Seydlitz had done with his cavalry, now changed direction to the left, and ordered the whole line, together with the artillery, to advance to the attack on the Janushügel, by which movement his left wing inclined to the left, while the right for a time remained stationary. Reichertswerben was already occupied by five Prussian battalions.
The enemy’s infantry advanced as carelessly as their cavalry had done, and hastened towards the village, without anticipating an attack from that quarter. They were, therefore, completely taken by surprise when the Prussians suddenly appeared; their battalions found no room to deploy, their dense masses were ploughed up by the Prussian fire, their right flank was entirely abandoned, while in the extreme rear the redoubtable Prussian cavalry was seen advancing. In vain they endeavoured to make some defence against the latter, or to check with their choked up columns the king’s advance; the artillery of the Prussian left wing mowed them down, and the infantry opened their powerful musket fire. After a short struggle, the whole body took to flight, while the troops in front were hurled against those in the rear, and the entire mass was hurried along in breathless disorder.
Two French regiments, cuirassiers and dragoons, had taken refuge with the infantry, and shut up the right flank of the latter within their two lines, by which means they, in some sort, defended it; but Seydlitz, with about ten squadrons, halted in their front, ready to strike, but delaying the attack, as the advance of the king could not fail, without any demonstration on his part, to make them give ground. As he anticipated, they shortly began to feel the effect of the murderous Prussian fire, and were put into motion so as to escape it. The commander of the horse, thus surrounded, was guilty of the indiscretion of wheeling his whole force to the right, close to the front of the advancing Prussian squadrons, by which movement he exposed his full rank to them.
Seydlitz did not let the opportunity escape him; he rushed impetuously on the wheeling line, forced them back upon the infantry, and threw the whole army into the wildest confusion; entire bands surrendered at discretion. In the mêlée Seydlitz was wounded by a musket shot in the arm, and the attack, in consequence, met with a temporary check. Favoured by this circumstance, some French regiments sought to renew the action, and cavalry were accordingly sent by their left flank to cover their retreat; one cavalry regiment, in particular, rushed at the sword’s point, on a Prussian corps, which gave way.