Sergeant Fricasse of the 127th Demi-Brigade: a French Soldier of the Revolutionary Period on Campaign, 1792-1802

Home » Sergeant Fricasse of the 127th Demi-Brigade: a French Soldier of the Revolutionary Period on Campaign, 1792-1802 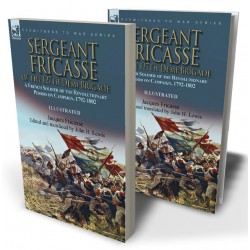 There are a number of translated French accounts that tell of the wartime experiences of the soldiers of Napoleon’s Imperial armies. There was a time however, before Napoleon became emperor, when the soldiers of First Republic of France were fervently committed to the spirit of revolution and the promotion of the republican ideal to the peoples of Europe. This book is a first-hand account, written in diary form by one of those ordinary soldiers in his own simple language. Jacques Fricasse, a member of the 127th Demi-Brigade, details a life of marching and campaigning. The detail he gives of life on campaign, the deprivations suffered by the ordinary soldiers of the period and his battlefield accounts make this book—possibly here translated into English for the first time—noteworthy. Fricasse’s text benefits from the inclusion of many explanatory notes by his original French editor and includes useful excerpts from Marshal Soult’s memoirs, since he served in these campaigns, as a young man. This newly translated Leonaur edition retains the original edition’s line illustrations of French Army uniforms of the time, and adds to them a selection of relevant illustrations which did not accompany the original text.

That same night, around ten o’clock in the evening, our battalion took charge of the Wolf Redoubt for twenty-four hours. After being relieved, we went to take a position to the left of the entrenched camp of Falise; that was the name of the Maubeuge camp.
Day by day we waited for the siege, but in vain. It has been reported by several people that General Cobourg’s intention was not to besiege the city, but to make it surrender by famine, because it was not provided with any food. There were twenty thousand men able to bear arms, both in the camp and in the town; at the time of the blockade, we took an oath to die with weapons in hand rather than surrender to the orders of a tyrant.
October 6th—Attacked with six thousand men, but without success. They showed up triple and double what we were. We only got away with a great loss.
October 7th—Same failure. We are invested from all sides without being able to give ourselves enlargement.
On October 5th, at the left redoubt, between the Bois du Tilleul and our outposts, a French sentry and a Dutch sentry were sixty paces from each other, which made it easy for them to converse. Four soldiers from my post came forward; the Dutch, who were in the Bois du Tilleul, were drawn by curiosity to join in the conversation. However, a Frenchman recognised his brother among the Dutch, who was the most eager to ask how we were, what we thought, and if we did not lack food.
Answer: “The Republicans are not missing anything.”
In derision, they replied that we were already eating our horses, and that, with our paper, our assignats, we had to starve. They added that they kept us in their nets, that they would make us dance the carmagnole (a lively street dance and song popular with the first radical French republicans) one last time. This one said that, although French, he would take pleasure in seeing us tear our tongues out.
A volunteer said to him: “Comrade, you do not appear to be Dutch, and no doubt it has not been long since you left France. You seem very bloodthirsty for a country which contains your parents, but which you must not hope to see again, because the law pronouncing your death sentence would make your head fall. This is what is reserved for rascals of your kind.”
His brother, who had recognised him, interrupted the conversation by saying: “Let me see this rascal! He used to be my brother.”
The other says: “If I was your brother, I still am.”
The volunteer said no, that he had made himself unworthy of it. “You know, unhappy man,” he added, “that I left voluntarily. May he remember the promise made! You promised to take care of our mother, but you twisted your oath, you left her without sustenance and in grief; you are unworthy of living, you are not a human, but a true barbarian.”
(Note that this generous soldier shared half of his pay with his mother.)
The Dutch, who understood a little French, did not fail to blame him, and the coward withdrew. His brother cocked his rifle, shot and struck him in the thigh. He got up and plunged into the wood.
An Austrian dragoon, of the Regiment of Coburg, charged one of ours, of the 12th Dragoons. After each firing their pistol, they approach to cut each other. What a surprise! They recognise each other as brothers; for fifteen years they had not seen each other. Instantly, their sabres drop, they leaped from their horses and throw themselves at each other’s necks, unable to say a single word. A moment later, they swore not to separate and live under the same banner. Our dragoon went to find General Jourdan to beg him not to regard his brother as a deserter or as a prisoner, and the general consented to incorporate this man into the regiment.