The Last Crusades: the Final Attempts by Christendom to Conquer Jerusalem and the Holy Land, 1202-1272

Home » The Last Crusades: the Final Attempts by Christendom to Conquer Jerusalem and the Holy Land, 1202-1272 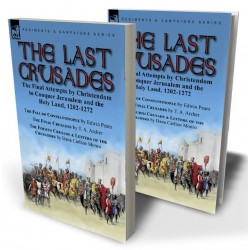 The Fall of Constantinople by Edwin Pears
The Final Crusades by T. A. Archer
The Fourth Crusade & Letters of the Crusaders by Dana Carlton Monro

The strategy of the Fourth Crusade (1202-04) was to first defeat the Egyptian Ayyubid Sultanate—the most powerful Muslim force. However, the Christian cause quickly became corrupted when it laid siege to and sacked the Christian city of Zara in Croatia (1202) before advancing on and sacking Byzantine Constantinople and partitioning the empire. Only a handful of the crusaders reached the Holy Land. The Fifth Crusade (1217-21) also attempted to subdue Egypt. The port city of Damietta, at the mouth of the Nile was attacked and taken as a preliminary of an advance on Acre. In July of 1221 the crusaders marched on Cairo where they engaged Muslim forces at Mansurah, were decisively defeated, compelled to surrender and depart from Egypt having achieved nothing. Seven years later the Sixth Crusade began and was a partial diplomatic success which enabled the Kingdom of Jerusalem to restore much of its former influence. The Seventh (1248-54) and Eighth Crusades (1270), made notable by the involvement of King Louis IX of France not only once again failed in their objectives, but resulted in the death of the king. The Ninth Crusade, led by the future king of England, Edward I, led to a ten year truce with the Mamluks before the fall of Acre, the expulsion of permanent European powers and the end of the time of Crusaders.

The transports soon advanced to the front, and were able to get so near the walls that the attacking parties on the gangways or platforms, flung out once more from the ships’ tops, were able to cross lances with the defenders of the walls and towers. The attack took place at upwards of a hundred points until noon, or, according to Nicetas, until evening. Both parties fought well. The invaders were repulsed. Those who had landed were driven back, and amid the shower of stones were unable to remain on shore. The invaders lost more than the defenders. The heightening of the walls had made their capture more difficult than at the previous attack. Before night a portion of the vessels had retired out of range of the mangonels, while another portion remained at anchor and continued to keep up a continual fire against those on the walls. The first day’s attack had failed.
The leaders of both Crusaders and Venetians withdrew their forces to the Galata side. The assault had failed, and it became necessary at once to determine upon their next step. The same evening a parliament was hastily called together. Once more, in the presence of defeat, the old differences showed themselves. Some advised that the next attack should be made on the walls on the Marmora side, which were not so strong as those facing the Golden Horn.
The Venetians, however, immediately took an exception, which everyone who knew Constantinople would at once recognise as unanswerable. On that side the current is always much too strong to allow vessels to be anchored with any amount of steadiness, or even safety. Villehardouin’s irritation at the suggestion shows how bitter the opposition still continued. There were some present, he says, who would have been very well content that the current or a wind—no matter what—should have dispersed the vessels, provided that they themselves could have left the country and have gone on their way.
It was at length decided that the two following days, the 10th and 11th, should be devoted to repairing their damages, and that a second assault should be delivered on the12th. The previous day was a Sunday, and Boniface and Dandolo made use of it to appease the discontent in the rank and file of the army. Once more, as at Corfu and before the first attack upon the city, the bishops and abbots were set to work to preach against the Greeks. They urged that the war was just, because Mourtzouphlos was a traitor and a murderer, a man more uisloyal than Judas; that the Greeks had been disobedient to Rome, and had perversely been guilty of schism in refusing to recognise the supremacy of the Pope, and that Innocent himself desired the union of the two Churches. They saw in the defeat the vengeance of God on account of the sins of the Crusaders.
The loose women were ordered out of the camp, and for better security were shipped and sent far away. Confession and communion were enjoined, and, in short, all that the clergy could do was done to prove that the cause was just, to quiet the discontented, and to occupy them until the attack next day. (Robert de Clari.)
The warriors had in the meantime been industriously repairing their ships and their machines of war. A slight, but not unimportant, change of tactics had been suggested by the assault on the 9th. Each transport had been assigned to a separate tower. The number of men who could fight from the gangways or platforms thrown out from the tops had been found insufficient to hold their own against the defenders. The modified plan was, therefore, to lash together, opposite each tower to be attacked, two ships containing gangways to be thrown out from their tops, and thus concentrate a greater force against each tower. Probably also the line of attack was considerably shorter than at the first assault.
On Monday morning, the 12th, the assault was renewed. The tent of the emperor had been pitched near the monastery of Pantepoptis, one of many which were in the district of the Petrion, extending along the Golden Horn from the palace of Blachern, about one-fourth of its length. From this position he could see all the movements of the fleet. The walls were covered with men who were ready again to fight under the eye of their emperor. The assault commenced at dawn, and continued with the utmost fierceness. Every available Crusader and Venetian took part in it. Each little group of ships had its own special portion of the walls with its towers to attack. The besiegers during the first portion of the day made little progress, but a strong north wind sprang up, which enabled the vessels to get nearer the land than they had previously been.
Two of the transports, the Pilgrim and the Parvis, lashed together, succeeded in throwing one of their gangways across to a tower in the Petrion, and opposite the position occupied by the emperor. (Nicetas.) A Venetian, and a French knight, André d’Urboise, immediately rushed across and obtained a foothold. They were at once followed by others, who fought so well that the defenders of the tower were either killed or fled. The example gave new courage to the invaders. The knights who were in the huissiers, as soon as they saw what had been done, leaped on shore, placed their ladders against the wall, and shortly captured four towers. Those on board the fleet concentrated their efforts on the gates, broke in three of them, entered the city, while others landed their horses from the huissiers.