The Collected Supernatural and Weird Fiction of Richard Middleton: Forty-One Short Stories of the Strange and Unusual Including ‘Children of the Moon’, ‘The Coffin Merchant’, ‘The Wrong Turning’, ‘A Railway Journey’, & ‘The Last Adventure’

Home » The Collected Supernatural and Weird Fiction of Richard Middleton: Forty-One Short Stories of the Strange and Unusual Including ‘Children of the Moon’, ‘The Coffin Merchant’, ‘The Wrong Turning’, ‘A Railway Journey’, & ‘The Last Adventure’ 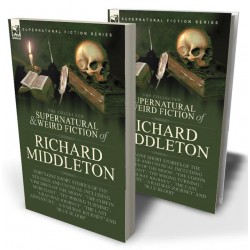 The strange fiction of a great and unfulfilled talent

Richard Barham Middleton was born in 1882 in Middlesex, England and began his career as a banker, a profession for which he was ill-suited and which made him deeply unhappy. Craving an unconventional and artistic lifestyle he joined the New Bohemians Club, where he met and was influenced by several literary personalities including Arthur Machen. Becoming an editor at Vanity Fair, Middleton eventually developed into a talented writer of prose. Despite asserting that his main interest was poetry, his reputation today is based on his expertise as a writer of short fiction, especially supernatural stories. The most well-known of these is the outstanding and frequently anthologised, ‘The Ghost Ship’ which originally appeared in a collection published after Middleton’s death in 1912 with an introduction by Machen, which is included in this volume (together with two other small pieces) for context. A young Raymond Chandler made Middleton’s acquaintance and admitted that he was in awe of his talent, despite his lack of commercial success, to the degree that he postponed starting his own writing career. Having moved to Brussels, Middleton became increasingly depressed and in 1911 committed suicide by poisoning himself with chloroform. This Leonaur edition gathers together all of Middleton’s writings of the strange, weird and peculiar.

Next day was one of those gorgeous blue days of which November gives but few, and Eustace was glad to run out to Wimbledon for a game of golf, or rather for two. It was therefore dusk before he made his way to the Gray’s Inn Road in search of the unexpected. His attitude towards his errand despite the doctor’s laughter and the prosaic entry in the directory, was a little confused. He could not help reflecting that after all the doctor had not seen the man with the little wise eyes, nor could he forget that Mr. G. J. Harding’s description of himself as a coffin merchant, to say the least of it, approached the unusual. Yet he felt that it would be intolerable to chop the whole business without finding out what it all meant. On the whole he would have preferred not to have discovered the riddle at all; but having found it, he could not rest without an answer.
No, 606, Gray’s Inn Road, was not like an ordinary undertaker’s shop. The window was heavily draped with black cloth, but was otherwise unadorned. There were no letters from grateful mourners, no little model coffins, no photographs of marble memorials. Even more surprising was the absence of any name over the shop-door, so that the uninformed stranger could not possibly tell what trade was carried on within, or who was responsible for the management of the business. This uncommercial modesty did not tend to remove Eustace’s doubts as to the sanity of Mr. G. J. Harding; but he opened the shop-door which started a large bell swinging noisily, and stepped over the threshold.
The shop was hardly more expressive inside than out A broad counter ran across it, cutting it in two, and in the partial gloom overhead a naked gas-burner whistled a noisy song. Beyond this the shop contained no furniture whatever, and no stock-in-trade except a few planks leaning against the wall in one corner. There was a large ink-stand on the counter. Eustace waited patiently for a minute or two, and then as no one came he began stamping on the floor with his foot. This proved efficacious, for soon he heard the sound of footsteps ascending wooden stairs, the door behind the counter opened and a man came into the shop.
He was dressed quite neatly now, and his hands were no longer blue with cold, but Eustace knew at once that it was the man who had given him the handbill. Nevertheless, he looked at Eustace without a sign of recognition.
“What can I do for you, sir?” he asked pleasantly.
Eustace laid the handbill down on the counter.
“I want to know about this,” he said. “It strikes me as being in pretty bad taste, and if a nervous person got hold of it, it might be dangerous.”
“You think so, sir? Yet our representative,” he lingered affectionately on the words, “our representative told you, I believe, that the handbill was only distributed to suitable cases.”
“That’s where you are wrong,” said Eustace sharply, “for I have no one to bury.”
“Except yourself,” said the coffin merchant suavely.
Eustace looked at him keenly. “I don’t see—” he began. But the coffin merchant interrupted him.
“You must know, sir,” he said, “that this is no ordinary undertaker’s business. We possess information that enables us to defy competition in our special class of trade.”
“Information!”
“Well, if you prefer it, you may say intuitions. If our representative handed you that advertisement, it was because he knew you would need it.”
“Excuse me,” said Eustace, “you appear to be sane, but your words do not convey to me any reasonable significance. You gave me that foolish advertisement yourself, and now you say that you did so because you knew I would need it. I ask you why?”
The coffin merchant shrugged his shoulders. “Ours is a sentimental trade,” he said, “I do not know why dead men want coffins, but they do. For my part I would wish to be cremated.”
“Dead men?”
“Ah, I was coming to that. You see Mr. ——?”
“Reynolds.”
“Thank you, my name is Harding—G. J. Harding. You see, Mr. Reynolds, our intuitions are of a very special character, and if we say that you will need a coffin, it is—probable that you will need one.”
“You mean to say that I—”
“Precisely. In twenty-four hours or less, Mr. Reynolds, you will need our services.”
The revelation of the coffin merchant’s insanity came to Eustace with a certain relief. For the first time in the interview, he had a sense of the dark empty shop and the whistling gas-jet over his head.
“Why, it sounds like a threat, Mr. Harding!” he said gaily.
The coffin merchant looked at him oddly, and produced a printed form from his pocket “If you would fill this up,” he said.
Eustace picked it up off the counter and laughed aloud. It was an order for a hundred-guinea funeral.
“I don’t know what your game is,” he said, “but this has gone on long enough.”
“Perhaps it has, Mr. Reynolds,” said the coffin merchant, and he leant across the counter and looked Eustace straight in the face.
For a moment Eustace was amused; then he was suddenly afraid. “I think it’s time I—” he began slowly, and then he was silent, his whole will intent on fighting the eyes of the coffin merchant. The song of the gas-jet waned to a point in his ears, and then rose steadily till it was like the beating of the world’s heart. The eyes of the coffin merchant grew larger and larger, till they blended in one great circle of fire. Then Eustace picked a pen off the counter and filled in the form.
“Thank you very much, Mr. Reynolds,” said the coffin merchant, shaking hands with him politely. “I can promise you every civility and despatch. Good-day, sir.”
You may also like