The Collected Shorter Supernatural & Weird Fiction of Algernon Blackwood: Volume 2—Eight Short Stories, One Novelette and One Novella of the Strange and Unusual Including ‘Ancient Lights’, 'A Descent into Egypt’, &‘Jimbo: A Fantasy’

Home » The Collected Shorter Supernatural & Weird Fiction of Algernon Blackwood: Volume 2—Eight Short Stories, One Novelette and One Novella of the Strange and Unusual Including ‘Ancient Lights’, 'A Descent into Egypt’, &‘Jimbo: A Fantasy’ 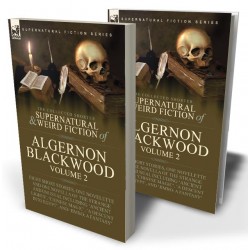 Algernon Henry Blackwood was one of the most prolific authors of supernatural and horror fiction in the history of the genre. In fact, his output was so great and rapidly produced that it is possible his entire cannon remains unknown. Born in Shooter’s Hill (which now part of south-east London) in 1869, his father was a civil servant and his mother was the widow of the 6th Duke of Manchester. As an adventurous young Englishman, Blackwood travelled to Canada and the USA where he worked at a number of jobs including as a journalist for the New York Times. At the turn of the 20th century Blackwood returned to Britain and embarked upon his career as a writer of supernatural and horror stories. His output was astonishing, resulting in at least ten collections of short stories together with 14 novels and plays. He regularly broadcast his work on radio and later on television. His two best known stories are probably, ‘The Willows’ and ‘The Wendigo’. Blackwood died from a stroke in 1951. The Leonaur collection of Blackwood’s strange fiction seeks to gather together the majority of his known shorter supernatural fiction into a comprehensive set.

In volume two readers will discover the novelette, ‘Jimbo: A Fantasy’ and eight short stories including ‘An Egyptian Hornet. and ‘By Water’ among others.

The eyes followed him. For a second he looked straight into those eyes, so that he could not fail to know them. And he understood, quite horridly, that both faces were too sleek, refined, and cunning for those of ordinary tramps. The men were not really tramps at all. They were disguised.
“How covertly they watched me!” was his thought, as he hurried along the darkening road, aware in dead earnestness now of the loneliness and desolation of the moorland all about him.
Uneasy and distressed, he increased his pace. Midway in thinking what an unnecessarily clanking noise his nailed boots made upon the hard white road, there came upon him with a rush together the company of these things that haunted him as “unexplained.” They brought a single definite message: That all this business was not really meant for him at all, and hence his confusion and bewilderment; that he had intruded into someone else’s scenery, and was trespassing upon another’s map of life. By some wrong inner turning he had interpolated his person into a group of foreign forces which operated in the little world of someone else.
Unwittingly, somewhere, he had crossed the threshold, and now was fairly in—a trespasser, an eavesdropper, a Peeping Tom. He was listening, peeping; overhearing things he had no right to know, because they were intended for another. Like a ship at sea, he was intercepting wireless messages he could not properly interpret, because his receiver was not accurately tuned to their reception. And more—these messages were warnings!
Then fear dropped upon him like the night. He was caught in a net of delicate, deep forces he could not manage, knowing neither their origin nor purpose. He had walked into some huge psychic trap elaborately planned and baited, yet calculated for another than himself. Something had lured him in, something in the landscape, the time of day, his mood. Owing to some undiscovered weakness in himself he had been easily caught. His fear slipped easily into terror.
What happened next happened with such speed and concentration that it all seemed crammed into a moment. At once and in a heap it happened. It was quite inevitable. Down the white road to meet him a man came swaying from side to side in drunkenness quite obviously feigned—a tramp; and while Martin made room for him to pass, the lurch changed in a second to attack, and the fellow was upon him. The blow was sudden and terrific, yet even while it fell Martin was aware that behind him rushed a second man, who caught his legs from under him and bore him with a thud and crash to the ground. Blows rained then; he saw a gleam of something shining; a sudden deadly nausea plunged him into utter weakness where resistance was impossible.
Something of fire entered his throat, and from his mouth poured a thick sweet thing that choked him. The world sank far away into darkness. . . . Yet through all the horror and confusion ran the trail of two clear thoughts: he realised that the first tramp had sneaked at a fast double through the heather and so come down to meet him; and that something heavy was torn from fastenings that clipped it tight and close beneath his clothes against his body. . .
Abruptly then the darkness lifted, passed utterly away. He found himself peering into the map against the signpost. The wind was flapping the corners against his cheek, and he was poring over names that now he saw quite clear.
Upon the arms of the signpost above were those he had expected to find, and the map recorded them quite faithfully. All was accurate again and as it should be. He read the name of the village he had meant to make—it was plainly visible in the dusk, two miles the distance given. Bewildered, shaken, unable to think of anything, he stuffed the map into his pocket unfolded, and hurried forward like a man who has just wakened from an awful dream that had compressed into a single second all the detailed misery of some prolonged, oppressive nightmare.
He broke into a steady trot that soon became a run; the perspiration poured from him; his legs felt weak, and his breath was difficult to manage. He was only conscious of the overpowering desire to get away as fast as possible from the signpost at the cross-roads where the dreadful vision had flashed upon him. For Martin, accountant on a holiday, had never dreamed of any world of psychic possibilities.