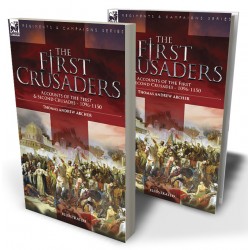 The First and Second Christian Crusades to the Holy Land

Thomas Archer was a well regarded historian on the subject of the Crusades and was the author of a substantial work which examined them in their entirety. That work covers a long period of time (1095-1244) and embraces many different campaigns, engagements and evolving methods of waging war. For students and readers of military history, Archer’s work has now been accessibly divided by Leonaur’s editors into shorter historical periods. The Seljuk Turkish domination of the Holy Land during the later 11th century threatened local Christian communities and pilgrims from Europe and Byzantium. Pope Urban II encouraged military support for the Byzantines and an armed pilgrimage. The first expedition known as ‘The Peoples Crusade’ was a complete disaster with over 60,000 of the pilgrim army slaughtered in southern Turkey by the Seljuks in 1096. Another effort led by by members of the nobility with military experience, including Bohemond of Taranto, and known as ‘The Princes Crusade’ set off in 1096 and was more successful securing victories at Nicea, Dorylaeum and Antioch. Jerusalem was reached in July 1099 and its defenders massacred. A Fatimid counter attack was defeated at Ascalon and Crusader states were established in the Holy Land. One of these so called ‘counties’, Edessa, fell to the incursions of the Turkmen Atabeg, Zengi. The ensuing Second Crusade failed to achieve any of its objectives in the Middle East which included an ill-advised assault on Damascus. However, it did contribute to the eventual expulsion of the Moors from Europe when a force of Northern European Crusaders assisted the Portuguese Army in the capture of the city of Lisbon.

On the morrow the Turks came out and gathered their dead for burial; but the Christians broke into the cemetery, flung the corpses into a ditch, and carried off the heads as witness to the number of those slain. Then the besiegers renewed the building of the castle, and when it was finished entrusted it to Count Raymond to guard.
During all these months it would seem that Bohemond had been in negotiation with the besieged. He had further obtained a promise from all the other chiefs, except Raymond, that he should be lord of the city when captured. Now, after having arranged with a certain emir, Pyrrhus or Firuz, for the betrayal of the city, Bohemond prevailed upon the chiefs much against their will to promise Antioch to the man, who should succeed in taking it.
Once sure of his reward Bohemond revealed his plan. A night was fixed for the surrender, and on the preceding day a part of the Christian army went foraging so as to throw the enemy off their guard. At midnight a little band gathered below the Gate of St. George, and there waited for the signal. At last a messenger came to bid them stay till the passing of the watch, which every night made the circuit of the walls, lamps in hand. Dawn was breaking before the wished-for sign was given, and Bohemond ordered his men to advance. They found a ladder ready, and sixty men ascended and seized the three towers of which Pyrrhus had charge.
When Bohemond learnt that the towers were in the hands of his men, he advanced with the remainder; in their exultation the Christians crowded on to the ladder, which broke beneath their weight. It was a desperate moment for the few, who were now left alone upon the walls; it was still too dark to see clearly, but at last they felt their way to a gate, broke it down, and so let in their comrades. As the morning sun rose, the Christians from their tents against the eastern walls saw Bohemond’s banner floating on the hill. There was a general rush forward, the other gates were burst open and the city won. There was riot everywhere, and forgetful of their God men gave themselves over to banquets, and the blandishments of pagan dancers.
Hardly had the Crusaders taken Antioch, when on June 5th the scouts of Corbogha’s army appeared before the city. He drove the Crusaders before him within the walls, and even gained possession of the citadel. From this vantage ground the Turks pressed the city hard. All day the Christians strove to bar their progress, and at night rested among the corpses of their comrades. As Corbogha’s host closed round the city on the south, the hearts of the besieged began to fail. Men turned their thoughts to flight, and under the cover of darkness let themselves down by ropes from the walls. The panic affected even the noblest; the Grantmaisnils—Alberic and that Ivo whose turbulence a few years later won him an evil fame in English history—escaped over the hills to the port of St. Simeon, and put out to sea.
Scarcely any event made such an impression as this cowardly flight: the recreant nobles are spoken of with scorn as “rope-dancers,” and as men who were everywhere called infamous and held up to shame and execration. But there was one deserter of still more importance even than these. Stephen of Chartres, son-in-law to the great Conqueror, had made his failing health an excuse for retiring to Alexandretta before the fall of Antioch. The besieged Christians sent him daily messages for help, and at last he mustered heart to scale a height whence he could look down upon the innumerable tents that filled the plain of Antioch. The sight was too much for his unwarlike mind; panic seized him, and he hurried back to his own camp eager to escape the coming doom. Departing northwards, he met Alexius, who was marching with a great army to assist the Crusaders. The emperor was only too glad for an excuse, and despite the expostulation of Bohemond’s brother Guy, Stephen and Alexius shortly went back to Constantinople. Meanwhile the state of Antioch grew daily worse.
You may also like