With Napoleon’s Irish Legion: The Personal Experiences of an Officer of La Legion Irlandaise During the Napoleonic Wars, 1803-15—Memoirs of Miles Byrne

Home » With Napoleon’s Irish Legion: The Personal Experiences of an Officer of La Legion Irlandaise During the Napoleonic Wars, 1803-15—Memoirs of Miles Byrne 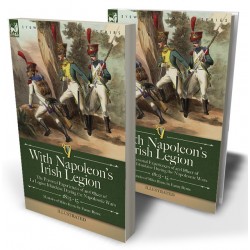 Napoleon’s Irish troops and their battles, recounted by one of their officers

Napoleon Bonaparte recruited to his causes the fighting men of nations which had suffered at the hands of the enemies of Republican and Imperial France. These soldiers hoped that by aligning themselves with French successes they would see their own aspirations for liberty realised. At the turn of the 18th and 19th centuries, it was understandable that in Ireland, which had long suffered under the British yoke, there were those who saw the promises of the French Revolution as beacons of hope. The protagonist of this book, Miles Byrne, was one such Irishmen. Indeed, French forces twice landed in Ireland to assist uprisings. Byrne took part in the abortive Irish Rebellion of 1798, as a guerilla fighter in the Wicklow Hills and in the failed Dublin insurrection of 1803 which resulted in his flight to France. There he became an officer in Napoleon’s Irish Legion serving in the Low Countries, Spain and at the Battle of Leipzig. His writings, edited by his wife and covering his entire career ran to two large volumes and contained much biographical information about his former comrades. Included in their pages, of course, was much on the subject of the struggle in Ireland itself. This special Leonaur edition has been edited from this larger work and concentrates solely on Byrne and the legion during their service in the Napoleonic Wars fighting for France. Contains illustrations which did not accompany the original text.

The general of division, Solignac, replaced General Thiébault as Governor of Old Castille. He employed the 2nd battalion in all his expeditions against the Marquis Ceto Porlier and the other Spanish chiefs, which made a great name for Fitzhenry and the officers who composed that battalion. Captain Allen, with his company of voltigeurs, surprised, near Najara, in the night, a squadron of Spanish cavalry, consisting of four officers and forty men. After taking horses that were fit for service, General Solignac had the rest sold and the money distributed amongst Captain Allen’s voltigeurs, to reward them for their activity. This had an excellent effect on the men of the regiment.
The Irish regiment was relieved in Old Castille, where it had been constantly engaged in expeditions against the guerrillas, by the Young Imperial Guards arriving from France in February, 1810. At this time orders were given for the formation of the eighth corps, under General Junot, Duke of Abrantes. It was composed of three divisions, commanded by Lieutenants-Generals Clausel, Solignac, and Lagrange.
The Irish regiment made a part of the 2nd division, General Solignac’s, in the 2nd brigade, commanded by General Thomier. On the first of March, 1810, it left Burgos for Rio Seco, and here Colonel O’Meara arrived from the depot at Landau, with a detachment, and took the command of the regiment. At Rio Seco the division was united and formed the headquarters of Generals Solignac and Thomier for some days.
The Duke of Abrantes had his headquarters with the division Lagrange at Valladolid.
The division of Clausel blockaded Astorga and began to make a regular siege; but his division was relieved in the trenches by General Solignac’s, and he marched to the advanced posts before the English to prevent them raising the siege. The 2nd division encamped near the town, and the Irish regiment was employed day and night in the trenches during this memorable siege, which lasted three weeks.
On the 19th of April, 1810, the general-in-chief, the Duke of Abrantes, arrived, and as the Spanish garrison would not surrender, he ordered the breach to be made, which with great difficulty was effected on the 21st of April, 1810. A battalion of chosen troops was organised to mount the breach, and Captain Allen’s company of voltigeurs, consisting of 150 men of the 2nd battalion of the first Irish regiment, marched at its head. After Captain Allen received his instructions as he passed the Duke of Abrantes in the trenches, he divided his company into two sections, and at the head of the first he marched on to the breach.
At 5 o’clock p.m., when the signal was given, he had to pass more than 200 yards uncovered before he got to the bottom of the breach, under the fire of above two thousand men; he, however, mounted it with such bravery and decision, that when he arrived at the top, he turned round and saluted the general and the army of above 30,000 men; then pointing to his men to fire on the enemy that was on his flank, and to follow him into the town, he took possession of a house near the rampart, according to the instructions of the Duke of Abrantes, in order to keep up the communication between the breach and the trenches; and this he defended the whole night.
In order to facilitate the mounting of the breach to the rest of the battalion, he made a temporary rampart of the men’s sacks on his left flank, from behind which he kept up a continual fire on the enemy that approached the breach from the rampart, who he feared might cut off his communication with the trenches. All the officers, senior to Allen, of the battalion being killed or wounded, all orders were given by him during the night till the arrival of Captain Legrave, aide-de-camp to the Duke of Abrantes, who had been designed to command the battalion, but who did not join it till one in the morning.
A drummer of Captain Allen’s, in mounting the breach, had both his legs broken, but he kept his drum, sat down and beat the charge as long as he was able, and indeed until all the battalion got up: for this he received the cross of the Legion of Honour. The rest of Commandant Fitzhenry’s battalion remained all night near the breach, ready to mount the first in the morning, and suffered much. Every company had men killed and wounded, carrying ladders to the breach, which was scarcely practicable. His adjutant-major Perry, and his adjutant Gougie were both wounded, the latter lost his arm.
The battalion received on this occasion great praise from the Duke of Abrantes and the other generals. Captain Allen’s conduct was so remarkable as to excite general admiration throughout the army assembled there: indeed, it exceeded all praise that could be given him.
You may also like