The Fourth Leonaur Book of Great Ghost and Horror Stories: Twenty-Two Short Stories of the Strange and Unusual

Home » The Fourth Leonaur Book of Great Ghost and Horror Stories: Twenty-Two Short Stories of the Strange and Unusual 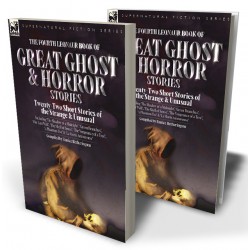 It is often acknowledged that the fictional ghostly tale is best suited to the medium of the short story, which may explain why so many authors have tried their hands at writing such tales. The attraction of creating a concise yarn of suspense and escalating tension, gratified by a literary punchline has been irresistible to writers. Shorter fiction depends upon a strong concept and concise characterisations devoid of superfluous prose, which will entice the reader towards a chilling conclusion darkly lurking beyond the turn of the page. Little wonder that during the ‘Golden Age’ of the form, and to a certain extent ever since, ghost and horror fiction has gained many enthusiastic aficionados. Leonaur has principally published comprehensive collections of stories of the supernatural and weird defined by the canons of their authors. However, in the previous Leonaur Book of Great Ghost and Horror Stories, editor Eunice Hetherington gathered together more tales written by many authors whose literary output in this genre was insufficient to create a volume in their own right. This, the fourth book in this series continues that tradition. Here you will find evocative tales, perhaps from writers little known, including ‘A Bewitched Ship’,‘Lazarus’,‘The Haunted Orchard’,‘A Fight with a Ghost’,‘The Devil of the Marsh’ and many others.

Here, pausing, she looked intently at me. And presently she went on speaking.
“There is neither anger nor mercy in your eyes. They have become like the eyes of a stone image in a temple—eyes that change not and see not. Hear me now to the end.
“He has broken the great oath, and the punishment is sure. One will come to him—he knows not when, but it will be very soon—and will say to him: ‘show me the twin pearls that are in all things alike, for this is the proof that you have fulfilled your oath.’ And if he has them not, then must he be slain instantly. And, further in that far country from whence he came the life of his mother will be forfeited, for she was the surety for him in the great oath. And shall not his death be also mine?
“He has but one of the twin pearls, and the other is in your keeping. So that you now hold in your hand three lives.
“It may be that you will say to yourself that I was very young, and that when I tempted him to break his oath, I knew not what I did. And you may say further that your hatred is against destiny, and not with these thistle-seeds that the wind of destiny has swept together. If that were so, and you gave me the twin pearl and let us depart with it to his own country, then in all the words of praise there is none, that is worthy of such a great nobility.
“But in that I ask, it may be, more than any man can give. So, if you still desire me, I will remain here. And if you would have me as a wife or as a slave, I will be ever faithful and obedient. And I ask no reward but that by some instant messenger you will send the twin pearl to my lover, that he may go in peace. And I myself will see him no more at all. Do with me as you will, but let not his blood be upon my head. The fault was mine. Moreover, he has in part fulfilled his oath, for by me he sends to you the seed of the tree of death. I pray you to answer me.”
It is very truth that until then I knew not what I would answer. But as she spoke, she drew from her garment that silver glistening ball, and held it out to me, and I took it. It was still warm with the warmth of her beautiful body.
In a moment I had buried my dagger deep in her body. She fell at my feet, and a shudder went through her, and she was dead.
I became quite calm again, and my mind was as clear water, and my heart beat steadily and quietly. I knew just what I would do.
I dug a deep grave for her in a corner of my garden. Then I drew forth the dagger, wrapped her in the silken carpet, and so buried her and the silver seed with her.
I made the earth smooth over her, and cleaned my dagger. And at last, it was all so ordered that the garden looked even as it looked the morning before, and there was no trace of that which had been done. Neither had any eye beheld it.
And then I rode forth to the tomb that I had found in the great rock, and that the woman’s lover had also found. But there, even as I feared, I came too late, and my work had been done for me.
The man lay dead in the entrance to the tomb with a knife in his throat. The bundle of fodder that he had carried for the ass had been spread out like a couch, and beside it were a jar of water and a brass cup. But the white ass bedecked with silver ornaments was no longer there; and I supposed that the man who had slain him had taken it, but he had not taken the twin pearl, for that lay on the open hand of the dead man. There I left it. And I left the dead man to the vultures and jackals. And I saw that all the time the messenger journeyed from that far country another had travelled close behind him, watching to see if he fulfilled his oath, and with the power to slay him if he broke it.
And after that I went back to my own house and lay on my bed, preparing for myself that which I believed should be my last sleep, merging itself in the end in death. But the drug that I took failed me. Sleep, indeed, I obtained, but at noon on the following day I waked again. And in my sleep, it was revealed to me that not at this time, nor after this manner, should my death be. There were to be yet two years of waiting for me, while the silver seed woke to life where I had set it, even in the very heart of death.