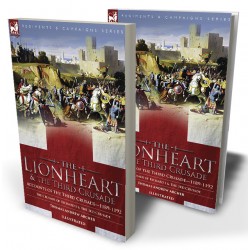 The successful Crusade which made Richard the Lionheart a legend

Thomas Archer was a well regarded historian on the subject of the Crusades and was the author of a substantial work which examined them in their entirety. That work covers a long period of time (1095-1244) and embraces many different campaigns, engagements and evolving methods of waging war. For students and readers of military history, Archer’s work has now been accessibly divided by Leonaur’s editors into shorter historical periods. His writings on the Third Crusade, 1189-1192, are included here. Several European states were involved in the enterprise including France, Hungary, the Holy Roman Empire, Croatia, Genoa, Pisa and the Angevin Empire—the possessions of the House of Plantagenet covering England and portions of Wales, Ireland and France. Prominent among the leadership of the crusading force was King Richard I, known as the Lionheart. Archer’s text concentrating on the life of Richard the Lionheart is given here in its entirety. The Third Crusade concluded with a three year truce ratified by the Treaty of Jaffa and though this has been credited as a Crusader victory it was, ultimately merely an episode in warfare which would eventually lead to the expulsion of Christian European military and political influence from the Holy Land. Illustrated.

In February on Saturday the day of the Purification of Blessed Ever-virgin (Feb. 2), after breakfast Richard King of England and many of his suite and that of the King of France met, as they were wont to do, outside the city of Messina, bent on diversions of various kinds. As they went home through the middle of the city, they fell in with a certain rustic coming from a neighbouring hamlet. Now his ass was laden with reeds that people call canes. Of these reeds the King of England and those with him each took one, using them to tilt against each other.
And it chanced that the King of England and William des Barres, a very noble knight belonging to the King of France’s suite, charged one another, shattering their reeds to pieces. (William des Barres, one of Philip’s greatest warriors. He was taken prisoner by Richard in 1188, but breaking parole escaped. He afterward saved Philip Augustus’ life at the Battle of Bovines; 27 July, 1214).
By this blow the head-piece of the King of England was broken; whereon the king, being wroth, set upon William so furiously as to make him and his horse stagger. And as the king was attempting to throw William to the ground, his own saddle was upset; and the king came down quicker than he liked. Then a fresh horse, stronger than the other, was brought up. This the king mounted and made another attack on William des Barres, striving to bring him down, but without success. For William stuck fast to his horse’s neck despite the king’s threats. Now when Robert de Breteuil, son of Robert Earl of Leicester (grandson of Robert II., Earl of Leicester), whom the king had on the preceding day girt, (belting the earl was the ceremony of investiture for a man of that rank), with the sword of his father’s earldom, began to lay hands on William des Barres so as to aid his lord the king, Richard cried out: “Hold off and leave us alone.”
And after these two had striven together for a long while both with words and deeds the king said to his antagonist, “Get thee hence and take care thou appear not before me anymore, for from this moment I shall ever be an enemy to thee and thine.” So, William des Barres departed from the king’s face confused and grieving at the royal indignation. But he went off to his lord the King of France demanding his aid and counsel as regards this which had fallen out. And on the morrow the King of France came to the King of England on behalf of William des Barres, asking for peace and mercy in humble style; yet would not the King of England hear him.
Next day the Bishop of Chartres, the Duke of Burgundy, the Count of Nevers, (Peter de Courtenay II., son of Peter de Courtenay I., and so grandson of Louis VI. and first cousin of Philip Augustus), and many other French nobles cast themselves with the humblest prayers at his knees, begging peace and mercy for William des Barres; neither would the king hear them.
Accordingly on the third day William left Messina because the King of France would no longer keep him in his service against the will of the King of England. But sometime after, when the time for crossing over drew near, the King of France with all his archbishops, bishops, counts, barons, and the chiefs of the whole army came once more to the King of England, and casting themselves at his feet begged peace and mercy for William des Barres, shewing what loss and inconvenience the absence of so valiant a knight would cause. At last, after much difficulty, they got the King of England to consent to the peaceable return of the said William, Richard undertaking to do him no ill or harm, and not to proceed against him so long as they were both busied in the service of God.
Then the King of England gave many ships to the King of France and his men; after which he distributed his treasures lavishly to the whole company of knights and to the sergeants of the whole army, till many said that none of his predecessors had given away in a year so much as he gave away in that month. And of a surety we may believe that by this generosity he “won the favour of the Thunderer,” since it has been written “God loveth a cheerful giver.”
In the same month of February, the King of England sent his galleys to Naples to meet Queen Eleanor, his mother, Berengaria, the daughter of Sancho, the King of Navarre (whom he was about to wed), and Philip Count of Flanders (son of Theodoric), who accompanied them. But the king’s mother and the King of Navarre’s daughter put in at Brindisi, where the admiral Margaritus and other of King Tancred’s men received them with all honour and reverence. The Count of Flanders however came to Naples, where, finding the King of England’s galleys, he went aboard, and arriving at Messina became a supporter of the King of England. The King of France, angered at this, brought it about that the count should leave the King of England and return to him