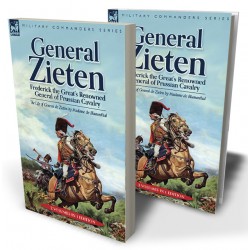 Hans Joachim von Zieten was, together with Seydlitz, one of the most notable commanders of cavalry in the Prussian Army of the 18th century. Whilst Seydlitz is consistently portrayed in the uniform of a heavy dragoon, Zieten is always presented as a light cavalry officer, the epitome of the hussar. Born in the final year of the 17th century in the Margrave of Brandenburg, he grew to be a diminutive though quarrelsome young man, prone to being involved in scrapes which delayed his military promotions, resulted in terms of imprisonment and caused him to be cashiered from the army. In fact, during his career he was involved in no less than 74 duels. His fortunes changed in 1730 when he was given command of a company of hussars. The man had found his place in the world and his hussars became renowned throughout Europe. Zieten served in four of Prussia’s wars: The War of Polish Succession, The First Silesian War (War of Austrian Succession), The Second War of Silesian Succession and most notably during the Seven Years War. By 1757, Zieten had reached the rank of general and was involved in the battles of Reichenberg, Prague, Kolin and Leuthen. Now his star was almost continually in the ascendant, and he distinguished himself at Hochkirch, Liegnitz and Torgau. By the end of the war he was entrusted with the command of the Prussian Army in the absence of Frederick the Great. The king forbade Zieten from engaging in the War of Bavarian Succession and it was during this period of enforced leisure that Zieten worked with his niece, the author of this book, on his biography.

On his way, he found Prince Maurice employed in distributing cavalry in the various chasms of the lines to prevent the enemy from taking advantage of their broken state.
He thought it necessary to follow his example; and he began to throw his squadrons into the gaps, and upon the enemy who were threatening them; and who, besides the advantage of ground, had likewise that of a formidable and well-served battery. As this battery was raised on the top of a steep eminence, its fire was so destructive, that, in order to get rid of it, Prince Maurice had recourse to a desperate and doubtful expedient. He engaged Zieten to put himself at the head of four regiments of heavy horse, and to attempt to carry it. The attack was made, and resisted, with equal vigour.
The assailants fell back with great coolness and good order. Their intrepid general made another effort, and was well seconded by his men. The squadrons pressed forward, and the moment of victory was perhaps at hand, when Zieten was struck with a grape shot. He was seen to faint upon his horse, and was supposed to be killed; and the troops, who a moment before had braved the mouths of the cannon, were now struck with a panic, and betook themselves to flight. Zieten was on the point of being abandoned to the mercy of the enemy.
The ball had grazed his head, and carried away his cap; the contusion it made had deprived him of all sensation, and he would have fallen from his horse, and have been trampled upon by the fugitives or buried under heaps of dead bodies, had it not been for the timely assistance of a young officer in his suite. His name is entitled to a place in the history of the man he so essentially served. The person to whom Zieten owed his safety, was M. de Berge, a cornet of the regiment of Krockow.
He flew to the general, and supported him on the saddle; and while he was endeavouring to restore him to life, the general’s horse was pierced by a new discharge of grape-shot. The cornet alighted before the horse fell, and taking advantage of the moment in which Zieten began to recover, he placed him upon his own; and covering his head with an old hat which had belonged to an Austrian musketeer, he delivered him up to the care of a brave and well-mounted cuirassier who conducted him to the equipages of Prince Maurice, where a surgeon fortunately was procured to dress his wound. The cornet had provided himself with another horse, and rejoined his corps.
Till Zieten was in a situation to be removed, he was placed in Prince Maurice’s coach, where he remained till the unfortunate issue of the day. As soon as a retreat was decided upon, the prince came in person to consult him on the direction the cavalry had to take. The place of rendezvous for the Prussians was fixed at Nimbourg. A general despondency prevailed through the army. Zieten, however, who partook of it in common with the rest, was able to conceal it in the recesses of his heart. He had now seen the laurels of many a campaign tarnished for the first time; he wept over thirteen thousand men, either killed or wounded; and he recollected with the deepest regret, the victims of the Battle of Prague and of Maleschaw: and he considered too, that much blood was still likely to be shed.
Nor is it indeed possible, even at the present day, to reflect on these accumulated disasters without shuddering; and the commander, the best practised in resources, is at a loss to conceive how Frederick was enabled to sustain, and terminate with glory, this destructive war with such disproportionate forces, and to engage in such a number of battles, undismayed by the losses he met with in several of them. At Collin, where he had only the imperialists to contend with, he had no more than thirty thousand men to oppose to double that number. The disproportion became afterwards more considerable. As the Prussians grew weak, the number of their foes increased; and instead of those brave veterans at whose head the king had opened his first campaign, he could now bring forwards raw troops only; an army of strangers, equally devoid of courage and patriotism.