Living With the Winnebagos: Experiences of Wisconsin During the Early 19th Century—Wau-Bun, The History of Fort Winnebago & The Winnebago War of 1827

Home » Living With the Winnebagos: Experiences of Wisconsin During the Early 19th Century—Wau-Bun, The History of Fort Winnebago & The Winnebago War of 1827 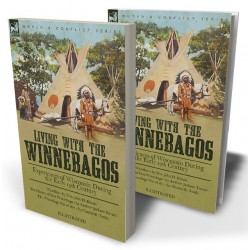 The author of this book, Juliette McGill Kinzie, was married to Indian Agent John Kinzie, and journeyed with him to take up his appointment at Fort Winnebago in 1830. Her narrative, which is the centrepiece in this unique Leonaur edition, covers her travels by steamer and keel boat to reach their new home. She thereafter recounts her many experiences among the Winnebago native American tribe during her four year residence in the Old West. In 1834, the couple returned to live in Chicago travelling, on horseback, through the wilderness over difficult terrain and frequently extreme weather conditions. That long and arduous journey is described in fascinating detail in these pages. Particularly noteworthy within Kinzie’s text is an appended description of ‘The Fort Dearborn Massacre’ of 1812, to which Juliette’s mother-in-law, witnessed from a boat. This authentic account of the attack by Potawatami warriors will be invaluable to all those interested in the early history of Illinois Territory and the city of Chicago. To add context to Mrs Kinzie’s account, this volume also includes a brief history of Fort Winnebago with brief biographical details of those who lived, worked and served there, including the Kinzies. and an interesting account of the Winnebago War of 1827 which was fought shortly before the Kinzie’s arrived in the region.

The storm was raging without. The trees were bending and cracking around us, and the air was completely filled with the wild-fowl screaming and quacking as they made their way southward before the blast. Our tent was among the trees not far from the river. My husband took me to the bank to look for a moment at what we had escaped. The wind was sweeping down from the north in a perfect hurricane. The water was filled with masses of snow and ice, dancing along upon the torrent, over which were hurrying thousands of wild-fowl, making the woods resound to their deafening clamour.
Had we been one hour later, we could not possibly have crossed the stream, and there would have been nothing for us but to have remained and starved in the wilderness. Could we be sufficiently grateful to that kind Providence that had brought us safely through such dangers?
The men had cut down an immense tree, and built a fire against it, but the wind shifted so continually that every five minutes the tent would become completely filled with smoke, so that I was driven into the open air for breath. Then I would seat myself on one end of the huge log, as near the fire as possible, for it was dismally cold, but the wind seemed actuated by a kind of caprice, for in whatever direction I took my seat, just that way came the smoke and hot ashes, puffing in my face until I was nearly blinded. Neither veil nor silk handkerchief afforded an effectual protection, and I was glad when the arrival of our huntsmen, with a quantity of ducks, gave me an opportunity of diverting my thoughts from my own sufferings, by aiding the men to pick them and get them ready for our meal.
We borrowed a kettle from our Indian friends. It was not remarkably clean; but we heated a little water in it, and prairie-hay’d it out, before consigning our birds to it, and with a bowl of Indian potatoes, a present from our kind neighbours, we soon had an excellent soup.
What with the cold, the smoke, and the driving ashes and cinders, this was the most uncomfortable afternoon I had yet passed, and I was glad when night came, and I could creep into the tent and cover myself up in the blankets, out of the way of all three of these evils.
The storm raged with tenfold violence during the night. We were continually startled by the crashing of the falling trees around us, and who could tell but that the next would be upon us? Spite of our fatigue, we passed an almost sleepless night. When we arose in the morning, we were made fully alive to the perils by which we had been surrounded. At least fifty trees, the giants of the forest, lay prostrate within view of the tent.
When we had taken our scanty breakfast, and were mounted and ready for departure, it was with difficulty we could thread our way, so completely was it obstructed by the fallen trunks.
Our Indian guide had joined us at an early hour, and after conducting us carefully out of the wood, and pointing out to us numerous bee-trees, for which he said that grove was famous, he set off at a long trot, and about nine o’clock brought us to Piché’s, a log cabin on a rising ground, looking off over the broad prairie to the east. (The honey-bee is not known in the perfectly wild countries of North America. It is ever the pioneer of civilization, and the Indians call it “the white man's bird.”) We had hoped to get some refreshment here, Piché being an old acquaintance of some of the party; but, alas! the master was from home. We found his cabin occupied by Indians and travellers—the latter few, the former numerous.
There was no temptation to a halt, except that of warming ourselves at a bright fire that was burning in the clay chimney. A man in Quaker costume stepped forward to answer our inquiries, and offered to become our escort to Chicago, to which place he was bound—so we dismissed our Indian friend, with a satisfactory remuneration for all the trouble he had so kindly taken for us.
A long reach of prairie extended from Piché’s to the Du Page, between the two forks of which, Mr. Dogherty, our new acquaintance, told us, we should find the dwelling of a Mr. Hawley, who would give us a comfortable dinner.
The weather was intensely cold; the wind, sweeping over the wide prairie with nothing to break its force, chilled our very hearts. I beat my feet against the saddle to restore the circulation, when they became benumbed with the cold, until they were so bruised, I could beat them no longer. Not a house or wigwam, not even a clump of trees as a shelter, offered itself for many a weary mile. At length we reached the west fork of the Du Page. It was frozen, but not sufficiently so to bear the horses. Our only resource was to cut a way for them through the ice. It was a work of time, for the ice had frozen to several inches in thickness during the last bitter night. Plante went first with an axe, and cut as far as he could reach, then mounted one of the hardy little ponies, and with some difficulty broke the ice before him, until he had opened a passage to the opposite shore.